With the new year well underway, we’re kicking preparations for this summer’s teen Opera Workshop production into gear! Before we get to that, however, let’s take a moment to look back at our studio’s first full productions, both of which have been strong forces in the direction of the studio as a whole.

Though clearly a musical theater piece, Act Too Studio’s first production, Goblin Market was conceived pretty much alongside the planning of our original Opera Workshop project, and though it was not officially a Workshop production, its sensibility and character was an enormous influence on what the Opera Workshop would become. With its complex (often dark) themes, heavy classical influences, a script (drawn mostly verbatim from Christina Rossetti’s famous poem) entirely in verse, so perfectly suited to its tiny, effervescent cast, Goblin Market left in its wake the terrifying question “What can possibly follow this?” What, indeed.

The answer to that question was The Medium. Written by Gian Carlo Menotti just after World War II, the piece was inspired by a stay in Austria, during which Menotti attended a séance with one of his hosts who believed she could communicate with her deceased 14-year-old daughter. The resulting story, about a scam artist who runs fake séances with the help of her sixteen-year–old daughter and a mute teenage boy, once again presented dark, complex themes—this time with an equally complex score—ideally suited to the Workshop’s older students, particularly its two graduating seniors. Playing to packed houses at Eastworks in Easthampton, the success of The Medium made producing full opera productions in the Pioneer Valley with teen singers seem truly possible. Suddenly, it all seemed possible. 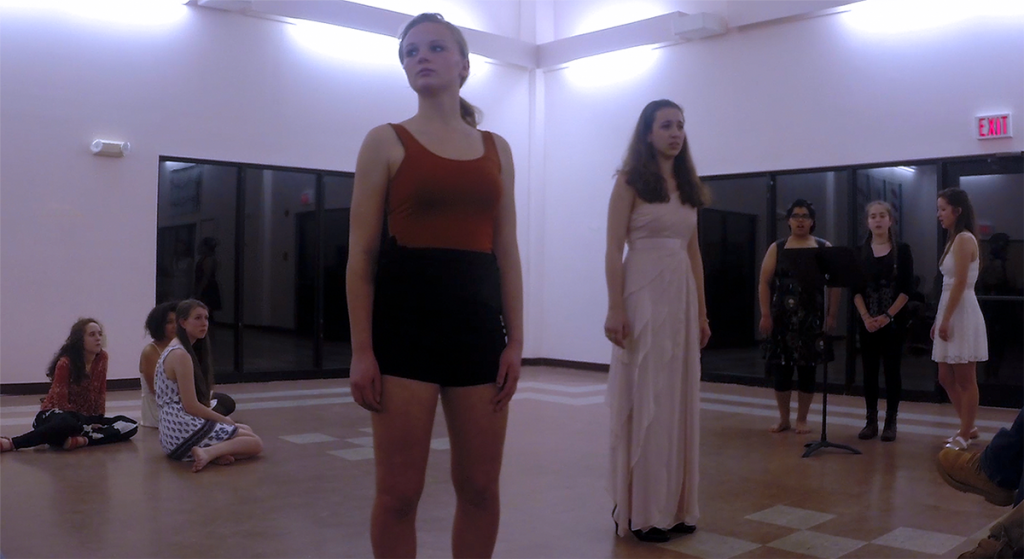 This summer’s project, Il sogno d’Arianna, is especially ambitious on a number of fronts, beginning with the material itself. Delving into the works of Claudio Monteverdi (1567-1643), we’ll be using the framework of “Lamento d’Arianna“—the sole surviving fragment of Monteverdi’s opera L’Arianna, based on the tale of Ariadne, princess of Crete, and her abandonment by Athenian hero Theseus on the island of Naxos—to tell the stories of women drawn from both Greek myth and Torquato Tasso’s epic 16th-century poem La Gerusalemme liberate (Jerusalem Delivered).

In addition to L’Arianna, our piece includes excerpts from Monteverdi’s L’Orfeo, as well as pieces from his 8th book of madrigals (“Lamento della ninfa,” “Il combattimento di Tancredi e Clorinda” and more) and selected Scherzi Musicali (“Quel sguardo sdegnosetto,” “Zefiro torna e di soavi accenti” and more). With guidance from early music expert James David Jacobs, we’ll be presenting our own new editions of these works including new English translations adapted specifically for our singers. The piece will also utilize ballet to tell its story, which will be the perfect companion to Monteverdi’s sublime score.

This production’s flexibility allows us to safely include our Workshop singers at its full range of ages (13-19) without fear of vocal stress, and we’re thrilled to have our newest members joining older alumni on stage this year.

Casting of our singing characters is complete as follows (additional dancers TBA):

Studio alumni Anna Plummer (Goblin Market) and Caroline Lee (The Medium) return to this production as both cast and as part of the creative team, bringing their ongoing training and experience back home to the Workshop. Alumna Alexa King (The Medium) will be returning in a production role as well! Stepping out of their creative/tech roles from last summer’s The Medium, original Opera Workshop members Tess Mathewson and Eliza Carson and new Workshop recruit Sylvia Simmons happily join us this year on stage. We’re excited as well to have McKenna Troy, once the youngest member of the original Workshop, as well as new Workshop members Sydney Scott, Daaé Ransom, and (new youngest members) Carina and Milena Gravante-Gunnells on board for their first full ATS production.

The students in this project are unique, not only in their willingness to pursue classical singing as teenagers, but their outright thirst for it. The studio’s policy is to invite students into the Opera Workshop when their voices are ready, but it bears repeating that, while vocal development is certainly beholden to age and time, it is hard work and dedication that ultimately brings these students’ voices to the fore. As our program continues, we hope that it will not only enrich the lives and artistry of the students involved, but also help to create an interest in classical singing both within the studio and in the community as a whole.

That said, we need your help! This year’s production will be presented at the Academy of Music in Northampton—a huge step up for the Workshop and its young singers. With that comes additional expense, not only for the use of the Academy itself, but also to ensure that the quality of the work lives up to the gloriousness of its venue!

Thanks to our fiscal sponsor, Fractured Atlas, helping out is as easy as a click and a couple of bucks.

Whether you’re able to contribute or not, we hope you’ll join us at the Academy of Music on August 5th & 6th to see our latest creation! More news to come as the spring continues!

Act Too Studio Opera Workshop’s production of Il sogno d’Arianna is made possible in part by a grant from the South Hadley Local Cultural Council.